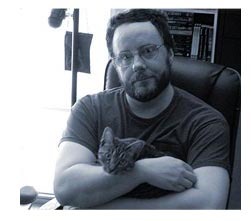 Gary A. Braunbeck is a prolific author who writes mysteries, thrillers, science fiction, fantasy, horror, and mainstream literature. He is the author of 19 books; his fiction has been translated into Japanese, French, Italian, Russian and German. Nearly 200 of his short stories have appeared in various publications.

His fiction has received several awards, including the Bram Stoker Award in 2003 for “Duty” and in 2005 for “We Now Pause for Station Identification”; his book Destinations Unknown won a Stoker in 2006. His novella “Kiss of the Mudman” received the International Horror Guild Award in 2005.